"Princess Peach is the ruler of the Mushroom Kingdom, and she's really sweet! She's always there to lend a helping hand to her friends. She can be girly and occasionally a bit air-headed, but she's no pushover, especially if her loved ones are threatened. She's my favorite princess, too! ~<3

But maybe don't tell the others I said that, please."

"Daisy is an independent, strong-willed woman who don't need no man. Tee-hee! Seriously though, she's a real tough cookie, and she's definitely a tomboy. She has a short fuse and can be a little rude sometimes, but at heart she's a fiercely loyal girl who loves and cares for her friends deeply. She rules over Sarasaland." "Rosalina is the newest princess to befriend Peach, and she's really cool! She rules over all of space, and she cares for little baby stars. She likes to read and she's really smart. I don't know how she stays so calm with all of her responsibilities. Space is huge!!" 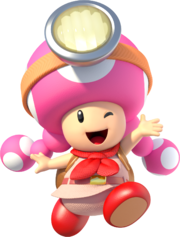 "Oh gosh, how do I describe myself?? Well, I'm a girly girl and a princess super fan, but I also have an adventurous side. I like to hunt for treasure, and I'm the leader of the Toadette Brigade, a group of elite toadettes gathered to help people do stuff! Well... actually, we're basically just a princess fan club. Close enough?"

"This guy is the biggest meanie ever! He tries to eat people and hurt them, he's really selfish and he smells bad. I hope the princesses kick his butt."
Choose
Page generated in 3.6308765411377 miliseconds