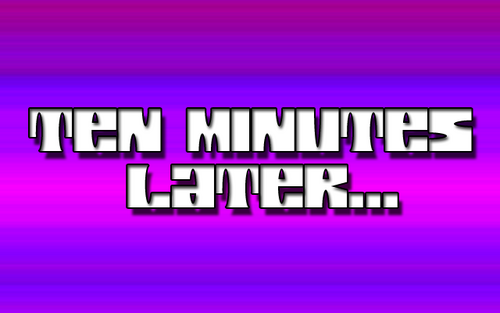 "What the heck is going on?!" One of the koopas asked angrily. "I demand to be let go this instant!"

"They'll let you go," Captain Toadette said in a poor attempt to sound devious, "But you have to tell them all about what Bowser's plans first!"

"Never!" The koopa under Daisy's foot shouted, shaking his left fist while trying to pry Daisy's foot off of him with his right hand.

"Wrong answer!" Daisy shouted, stomping down onto the koopa hard enough to scare him.

"Oof!" The koopa groaned, feeling the hurt. "Okay, okay, I get it! I'll talk, just please don't do that again. Okay?"

"Hey, shut up, dude!" The koopa under Rosalina's foot snapped, glaring at his pained partner. "Don't you dare squeal on Bowser. We don't know anything!"

"Are you sure about that?" Rosalina asked, implying that she knew something was being kept secret. "I am less prone to violence than my friend, but I will use force if necessary, as will Peach. You do not want us to stomp you, so please, just answer us so we don't have to. Because I am sure Daisy wants to and will do so if you give her a reason to, as will we."

"It's true, I will." Confirmed Daisy, a devious look in her eyes as she threateningly wiggled her toes against the koopa's sore belly.

"Fine, fine, sorry man, but I'm gonna talk." The koopa under Daisy said. His partner said nothing now- Rosalina was right, and he knew it. "Bowser didn't tell us much, but he did tell us that the piranha plants have been looking sleepy lately. I don't even know what that means though, I swear it!"

Daisy lifted her foot to smash the koopa again, but Peach raised her hand to make her stop.

"Fine," Daisy replied, kicking her koopa away from her and sending him tumbling. "But if we ever see you losers again, I'm making you my little koopa bitches, you hear me?" She threatened.

"Y-yes ma'am!" The koopa who had been kicked stammered, then ran away in fear. His friends followed close behind, scared of being stomped silly.

"Well, I gotta hand it to you, Rosie. Not sure how useful that was, but it was definitely fun." Daisy admitted.

"We should remember that too," Peach noted. "Sleepy piranha plants."

"I got it." Rosalina said, pointing to her noggin. She had an excellent memory, and would not likely forget such a thing. "Anyways, as I was saying before," Rosalina began. "Power Stars work by absorbing cosmic energy radiation from each other. That is actually what the light we see being given off by this Power Star is, along with some other frequencies. The reason it is so strong now is that we are close to another Power Star. In fact... it seems to be right over there." Rosalina explained, pointing to the nearby star.

"Let's hope all the stars are this easy to find!" Daisy said with fingers crossed, rushing over to the star.

Once all of the girls were there, Peach grabbed the star and held it up for all to see.