Create an account for this portal or Login!
Archives Entrance Tags Browsing Tags Approval Drawing Writing Video Latest Updates Commission List
Forum Index Non-vore Forums Vore Discussion / Upload Forums Vore Roleplay Forums Speciality Vore clubs Artists Valley New Forum Posts Since Last Visited Forum Search
Chat room FAQ Chat Entrance Character database Chat rooms logs
Account Configuration Blog setup Private Messages
Site FAQ / Term of Service Vore Wiki Blog List Feedback Interactive Stories Links Members Map Vore Downloads Polls
Secrets of Faybrook Academy - Page 5 - The Chase is On! - By knt27 - Overview
You give chase, rushing through the underbrush as the light winks again, almost out of sight. An exhilarating thrill runs through you as a spring breeze tousles your hair, fresh green leaves whipping by as you dodge around bushes and under overhanging branches. Your worries momentarily forgotten, you laugh joyously to yourself. There! Again, the blue light pulses, closer now. And another! The two glowing points dance around each other as they zip through the forest. Soon, you find yourself pursuing at least a dozen of the strange blue lights. You're so transfixed on watching your quarry, that it hardly registers when you pass into a part of the forest that you've never been to before. You only notice the change in scenery when you find yourself scrambling over an ancient fallen giant, its trunk carpeted with lush moss. You pause in your chase to take stock of your surroundings. The trees are old... very old. The knotted weave of the canopy high above blocks out most of the light, leaving the forest floor cast in a permanent gloom. Tendrils of mist snake through the ferns and swirl around your feet as you walk. You swallow dryly. You're lost.

You try to laugh off the rising panic, reassuring yourself that the small stretch of woods around the academy is hardly enough of a wilderness to get lost in, but a sinking feeling in your gut says otherwise. You glance around, spotting the winking lights again. Strange. They seem to have paused with you, as if they're waiting for you to resume your chase. You shrug. One direction's as good as any other, and in a stretch of forest as small as the Faybrook Woods, you're bound to hit a landmark sooner or later. You follow the lights at a wary pace, noticing that they're matching your speed now. As you wander through the shadowed half-light of the forest, more lights dance around you. First two dozen. Then fifty. Finally, the whole forest is illuminated by an eerie blue light as hundreds of the glowing creatures whirl through the branches and ferns.

The darkness gives way as you find yourself standing atop an embankment, peering down into a sun-filled glade. Through the center of the clearing runs a gurgling brook, its waters splashing merrily upon polished stones. The blue lights slowly spin around the perimeter of the clearing, a cyclone of sapphires that makes you dizzy to look upon. Your gaze pushes past them and spots movement below. By the brook lounges a stunningly beautiful woman, completely naked with the sun gleaming on her caramel skin. She stands and stretches, revealing her toned and athletic physique. A pattern of tattoos decorates her deeply tanned skin, covering one shoulder and part of her scalp. Her hair is light golden, almost white in its pallor, and is styled in a partially shaved undercut. You lean forward as you drink in the sight of her, your whole body electrified with desire. You're so transfixed that you fail to notice several of the blue lights descending into the clearing. As the woman begins to bathe in the stream, wetting her glistening skin, the lights dance around her head. She laughs melodically, holding out her hand in offering. To your surprise, the lights settle into her open palm. She lifts the glowing lights to her ear as if listening, nodding intently to whatever she's hearing. Humming softly to herself, the woman releases the lights and leaves the stream. Next she reaches down and begins gathering her equipment. She dons a belt outfitted with several wicked looking knives and strings an elaborately carved bow (from the look of the weapon, you're surprised that she has the strength to do so). Still humming, the woman grabs an arrow from her quiver, notches it, draws the bow... and points it directly at you.

You're so startled, you tumble from your hiding place, skidding painfully down the embankment and landing on the opposite side of the stream from the woman. You stand quickly, dusting yourself off and raising your hands defensively. "Whoa, whoa, whoa! I know what this looks like, but you've got the wrong idea!" The woman raises an eyebrow, flicking an eye to the tent in your pants. Her mouth quirks up into a deranged grin as she begins to giggle, her laugh unnervingly high and wild. And then, just as suddenly as her mirth emerged, she resumes her serious demeanor.

"I'm lost. I saw you and wanted to ask for directions, but you were..." You flush as your eyes take in the sight of the beautiful woman before you. "Well, naked." The woman doesn't lower her bow, but begins grinning insanely at you again, a wild glint in her eye. Something tells you that you're in for trouble.

"Fair is fair. You've seen all of me, you spying sneak. Now I want to see you. Strip for me. That's right. Get naked or this arrow's going right where it'll hurt most." You pause, but noting the gleaming point of her arrowhead, begin stripping off your uniform. As you undress, the woman continues speaking. "Now that we're on more equal ground, allow me to introduce myself. I have been called by many names... Mab, Artemis, Titania. You can call me Queen Titania. Or Your Majesty. I am queen of this forest." She does a little spinning dance punctuated with a slight bow, and then aims her arrow at you again. Something familiar jingles in your brain when you hear her names. Where do you know them from? "And if you've heard of me, dear boy, then you'll know that nothing good befalls the men who watch me bathe!" 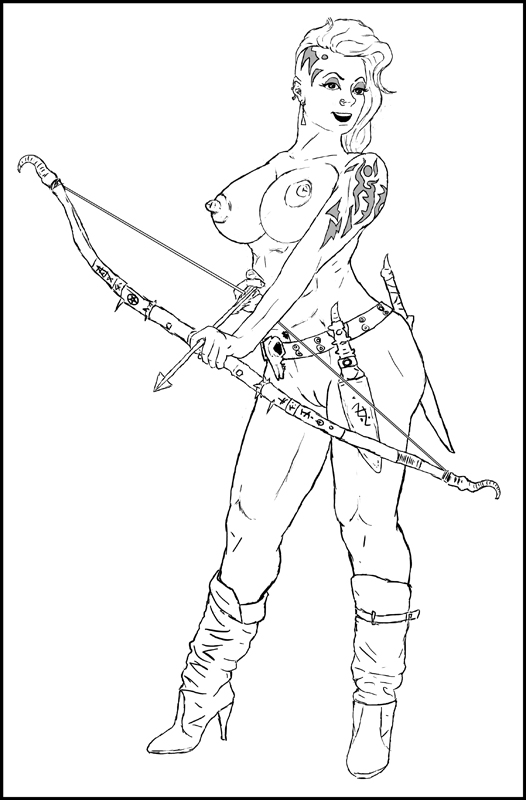